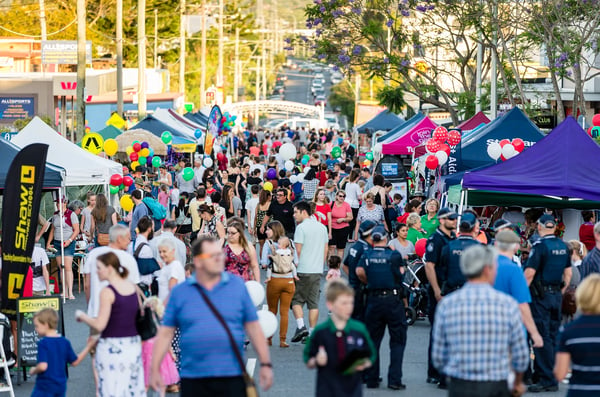 Every year in early November, the Sherwood Community Festival fills the main street of Sherwood with rides, food trucks, arts and craft stalls and performances.

The festival is hosted on Sherwood Road, between the train station and Oxley Road. With the roads closed, pedestrians take over the streets for a night of family fun.

Over the years the Sherwood Festival has grown from just a few stalls to now boasting over 130 stalls, and the festival grows bigger each year. As many of the locals would say, there is something special about the Sherwood area.

Walking down one of the leafy streets, it is common to receive a friendly smile from a stranger.

Bound by the river, the western suburbs have something special that is not as present in other areas.

The highlight of the festival for many is the Sherwood Arrows skipping club. At 5:30, kids from Sherwood State School open the festival with an outrageous skipping routine filled with tricks.

If the skipping is not quite your thing, then treat yourself to one of the many food stalls. Or maybe the rides or choirs is more up your alley.

No matter what your interest is, there is something for everyone at the festival.

The Sherwood Community Festival is a real testament to the volunteers who run it and the locals who support it every year.

The festival is a not-for-profit, community, member-based Incorporated Association. In a nutshell, this means there a no paid staff.

There are currently 12 people who organise the festival each year. One of those volunteers is Carmel Cole, who has helped on the Sherwood Community Festival committee for 17 years and has served as secretary for 15 of those years.

Carmel has been there through most of the festival’s lifetime. She says the festival helps to keep the spirit of Sherwood alive.

“Sherwood Festival started off because the Sherwood Road shopping centre was dying at the time. A few of the businesses got together and decided a street festival might be a good idea,” Carmel said.

Carmel says the community loves the festival and the committee gets a lot of support.

“It is just an evening of happiness, friendship and being able to mix in a safe environment.”

This year, one of the four entertainment stages was named after Carmel.

Each year it will host a range of performances including: dances, speeches, nativity scenes, choirs and other acts.

When asked about her achievement, Carmel said she was surprised yet delighted.

“I felt very humbled. I did not think I had done that much to deserve it, but it was very nice.”

Carmel Cole and other festival volunteers are all a testament to this kind local community.

Sherwood is situated just far enough from the CBD to maintain its close-knit community feel without sacrificing convenience. If you’re interested in becoming part of the friendly Sherwood community contact Place Graceville today.

Benefits of Living in an Apartment

Is Your Hot Water Not Working?