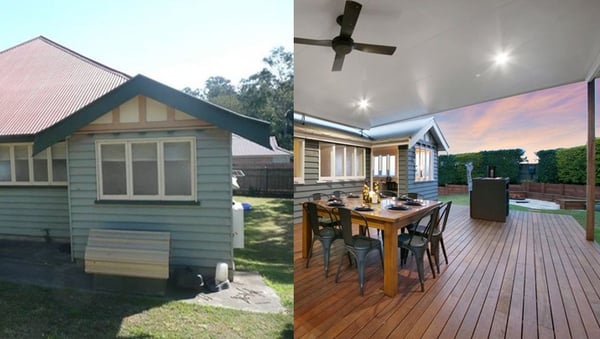 Queenslander renovations are taking Brisbane’s western suburbs by storm. Oxley has seen a dramatic rise in people deciding to renovate their Queenslanders instead of selling.

Located just half an hour's drive from the city, Oxley is the hidden gem of the Western suburbs. With its sense of community second to none and the suburb boasting relatively low prices, it’s no wonder people want to renovate their Queenslander rather than move.

In the heart of the Oxley, off Englefield Road, lies 2 Michael Place, a particularly notable Queenslander renovation.

This property, currently on the market with Place Graceville, has a charming story to go with it.

The home was sold in 2009 by owner Brad, who in 2014, when the house went back on the market, took the opportunity to buy back the home he loved.

After the home found its way back to Brad, despite some minor renovations being done, it still lacked an area where guests could be entertained in style. Brad and his partner Kath decided it was time the Queenslander underwent renovation to bring life back into the property.

In 2009, the back door opened to a tiny concrete slab, now in 2018 the back doors open onto a huge covered timber deck featuring an outdoor kitchen and fridge. The new back deck is an outdoor entertainers dream.

“My favourite part of the house is definitely the outdoor deck. Our main goal when we did this Queenslander renovation was to create an entertainment space, we could use year-round. “

“The best part about the back yard is that we can use the back deck all through the heat of summer. When winter comes around there is a firepit, so we can still entertain outside throughout the whole year.”

The backyard is now a functional space where the kids can run amuck while the adults watch on from the deck.

When Brad and Kath bought the house back in 2014, there were three bedrooms upstairs and one bedroom downstairs.

In 2018, the house now has two bedrooms upstairs and two bedrooms downstairs. The couple decided the Queenslander needed a shake-up and knocked down a wall upstairs, allowing two rooms to become the master bedroom with an en-suite and walk in robe. They built an internal laundry and created a second bedroom downstairs. Downstairs now consists of two huge bedrooms and it is the perfect teenagers retreat.

In just nine years, after two renovations of the Queenslander, the market value of the house has almost doubled.

Brad and Kath maximised the property’s amenities to its full potential. They have created a space which is perfect for entertainers.

Did you want to become an Oxley local and enjoy the sense of community? Then come and have a chat with us at Place Graceville. Who knows, 2 Michael Place, Oxley could be yours.

How to Prepare a House For Sale