Everything you Need to Know About the Yeerongpilly Green Development 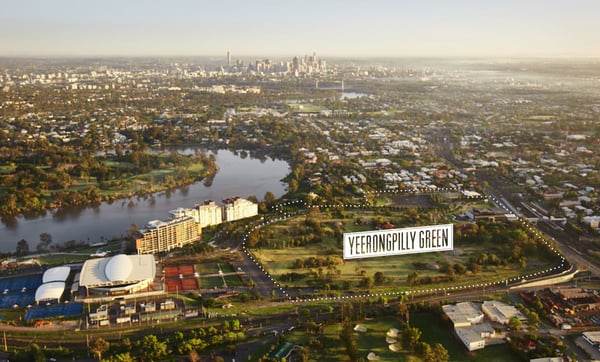 For over a year, West Brisbane residents have had to detour around the new Yeerongpilly Green development at the Queensland Tennis Centre.

When the road finally opened at the end of last year, locals were intrigued with the development.

Rumours have circulated around the community for months about what will be on the new Yeerongpilly Green development.

Will there be a shopping centre, or perhaps a country club? How many apartments will there be?

We’ve done the research and compiled a comprehensive list of everything that will be on the riverfront Tennyson site.

What is Yeerongpilly Green?

Located 6 kilometres from the city lies the site of the $850 million Yeerongpilly Green development.

By completion, the 14 hectare site will house 3000 residents, 5,000m2 of retail, a restaurant precinct, commercial buildings, five hectares of parkland and a boutique hotel.

Don’t get too excited, as the construction won’t be finished for another few years. However, according to Minister for State Development, Manufacturing, Infrastructure and Planning, Cameron Dick, over the next decade, the development will generate around 6,600 construction jobs, including 335 apprentice jobs, and 1,000 full-time long-term jobs on completion.

Overall, the aim of the development is to create a village where people will live, work and play in one space. 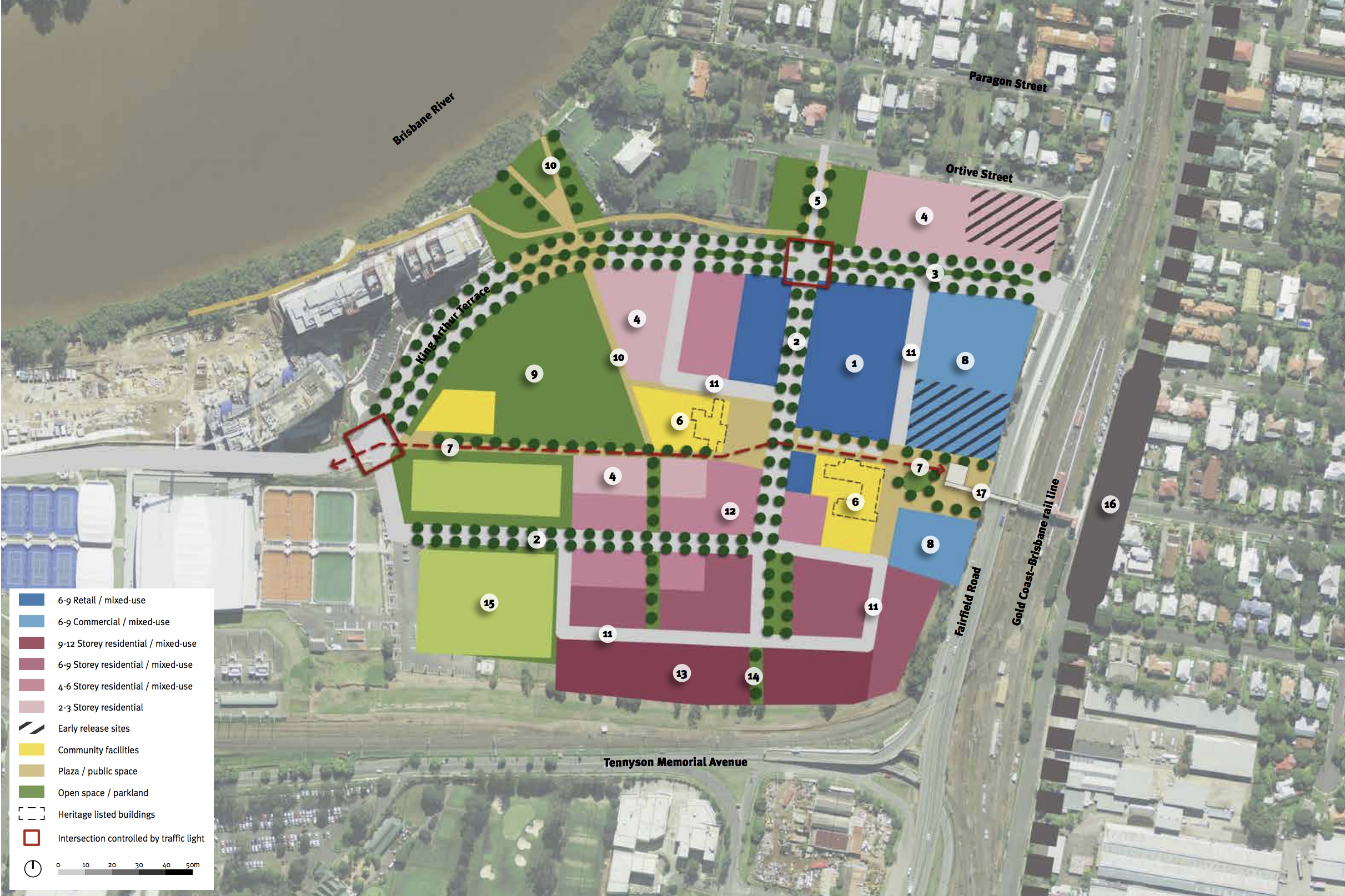 Located on the river, the site has been used for a wide range of surprising activities over the years.

In the 1850’s arrowroot and cotton were grown on the site. Other parts of the site have homed UQ’s vet school, the US army, and an animal research institute. In 1887, ‘Hayslope’, a two story mansion, was built and stood proudly until Brisbane City Council acquired the land in 1947 to build the Tennyson powerhouse. After 33 years in use, the powerhouse was demolished in 2005.

Perhaps the best thing about this new development is the 5 hectares of parklands. It’ll include new pedestrian paths, bikeways as well as public plazas, community facilities, open spaces and 10,000 new plants.

19% of Yeerongpilly Green will remain as publicly accessible parks and pedestrian space.

The development sees the addition of direct, safe and clear pedestrian pathways, that connect the Yeerongpilly railway station and Queensland Tennis Centre. As the new path runs straight through the development, it has been nicknamed the ‘spine’.

Minister for State Development, Manufacturing, Infrastructure and Planning, The Honourable Cameron Dick says: “The Queensland Government has spent $30 million on the creation of parks, plazas and infrastructure at Yeerongpilly Green, which will benefit residents, Brisbane locals and visitors.”

The area is a flood zone however the nine parklands, which accommodate a range of recreational activities, have stormwater retention and treatment areas to manage local flooding.

Recently it was announced that Woolworths will anchor the new 5000m2 shopping precinct, which will be home to many restaurants.

Pending Brisbane City Council approval of the development application, construction of the Woolworths will start in 2019. The Woolworths will generate close to 100 new jobs once completed, including many jobs for school-aged kids.

By completion of the site, 1200 residential apartments and townhouses will be erected and will house an estimated 3,000 residents.

The urban planning on this project has ensured all factors have been taken into consideration.

On the back of the site, near the train line, 9 to 12 storey residential apartments will be constructed. According to the Concept Plan of Development for Yeerongpilly Green, the tall buildings aim to facilitate maximum access to views, breezes and sunlight while minimising noise, dust and vibrations from the transport routes behind the buildings.

The building heights will step down towards the north where the river and the tennis centre is. Four to nine storey residential developments provide a gradual transition between the high-rise development in the south of the site and the low-rise development to the north.  These buildings will maximise the views of the parkland and river for all buildings and limit potential overshadowing.

Two heritage listed buildings will be restored at a cost of $10 million. ‘The Stables,’ a heritage listed timber building, will serve as Yeerongpilly Green sales and display suite.

According to the Australian Financial Review, ‘The Institute,’ a heritage listed brick building, will be turned into a country club, complete with bar, restaurant and outdoor area which will back onto further green space.

A 103 room boutique hotel will be established on the site. Although it seems like a strange location to place a hotel, the hotel will be vital during the Brisbane International as the tennis each year sees over 90,000 people attend.

Over the years, this hotel may house some of the best tennis players in the world. It will reduce the commute time for many referees, coaches and tourists who fly in for the tennis.

What does the Development Mean for Local Residents?

After a long period of the site being desolate, new Yeerongpilly Green residents and the local community are welcoming the development.

It will mean more public transport, restaurants, cafes and community spaces – all amenities that increase property value in a suburb. This development has been planned to benefit everyone, not just the people who will live there, breathing fresh life into a site which has been neglected for so long.

The Yeerongpilly Concept Plan of Development for the site near the Queensland Tennis Centre can be viewed in full here.