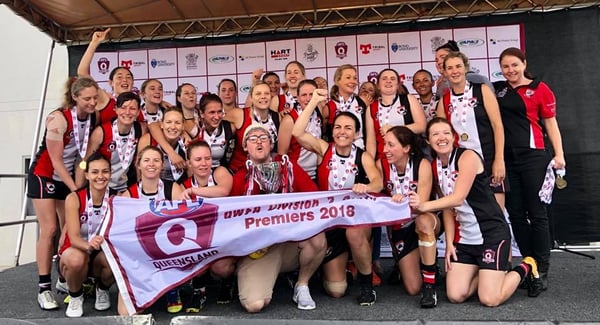 We’re thrilled to share that the inaugural Morningside Panthers Senior women’s team have won their division, recently claiming victory in the grand final game at Robina.

Sponsored by Place Bulimba with support from Carla Haddan and Brenton Faehrmann, this incredible team of women have beat the odds in their first ever season.

The team was founded late last year, seeing the group of women come together from a variety of backgrounds. We sat down with one of the team’s captains, Tammie Lauritsen to learn about her experience.

“Only a couple of girls had played AFL before, and some had never watched a football game! A few had played some competitive sports such as netball and hockey, so everyone understood it was a matter of see the ball, get the ball. In the end, we had the perfect group of athletes.”

Following months of pre-season training and a successful line of matches, the grand final saw the team up against Yeronga. The game fell on Queensland’s first day of rain in months, but the less than ideal conditions only increased the team’s determination.

“The lead up was so exciting, and the win was unbelievable for our first year as a team. It’s something that we still can’t believe.”

Tammie explained the value of Place Bulimba’s support for the team.

“You can’t be a team without having a professional organisation backing you, and to have such a solid sponsor was amazing. Having a brand like Place Bulimba behind us had an incredible mental effect on the girls - they couldn’t believe that they had such great backing. To meet people with spirit like Carla and Brenton influenced our team more than they probably realised. We couldn’t have had better people behind us - they’re very cool and complement each other very well.”

So, what’s in store for the future of this incredible group of women?

Next season’s training will commence at the end of this year, with the competitive season kicking off in April 2019. Tammie explained how important the team culture is in bringing everyone back together next year.

“We’ve got such an incredible team bond, there’s something unique about the sport - you’ve got to have people’s back, trust each other, and work together or you’ll get hurt.”

As for next year’s season, Tammie hopes the club will get bigger and better.

“After the big win, it’s up to AFL Queensland and the Morningside Panthers club as to whether we move up divisions. In the meantime, I’d love to see the club develop more grassroots support. An under 17 young girls’ team would be amazing to see and would be great for the community.”

Place Bulimba is dedicated to supporting our local community. Click here if you’d like to learn more about the Place Bulimba office.