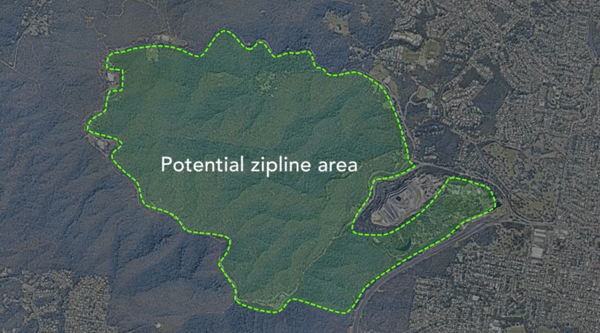 One of Brisbane’s premiere hiking destinations, Mount Coot-tha, is set to get an upgrade of epic proportions later this year - a zipline!

It was announced in March this year that the Mt Coot-tha zipline project will be built by Zipline Australia, a local company based in West End.

The project will result in two separate zipline tours through the trees and significant areas of the Mt Coot-tha forest, as well as a treetop suspension bridge which will be the longest in the southern hemisphere!

The first zipline tour, known as the Treetop Canopy Tour, will be 1500 metres long, starting west of the summit and finishing to the west of the JC Slaughter falls.

The second tour route, the Megazip Tour, will consist of two parts and begin at the summit, finishing at the Botanic Gardens and crossing the lake.

Finally, the project will produce a treetop suspension bridge enabling tours through the trees for those after a little less adventure. All of the tours will aim to provide history and education about Mt Coot-tha’s flora, fauna and Indigenous heritage.

Cr Quirk spoke further about the project and the implications it will have for Brisbane tourism in the media release.

“Not only will this be a great experience for the city’s seven million tourists each year, but a great addition to the leisure and lifestyle activities available to residents,” Cr Quirk said.

“Council will contribute $1 million to the construction of the zipline, as part of a wider $15 million investment into the Mt Coot-tha precinct over four years, while Zipline Australia will make a multimillion-dollar investment into new infrastructure and operations for the ziplines.”

Zipline Australia Managing Director, Matthew Thompson, said in the Brisbane City Council media release that their “vision is to deliver a signature visitor experience that reflects the unique opportunity that Mt Coot-tha offers, with respect for the site’s environmental values and cultural heritage.”

This project is definitely something unique for Brisbane, and will hopefully increase tourism to the western suburbs in a beneficial and environmentally-friendly way.

Riverside Lifestyles for Every Budget

Which Side of Brisbane’s Western Suburbs Should you Live On?

What does Queensland’s Population Boom Mean for Home Owners?